The Build Back Better Act Will Save The Average Family At Least $7,400 Per Year

WASHINGTON, D.C. —  A majority of voters believe that inflation is a result of pandemic-related issues, and want the United States to invest in jobs at home to drive prices down, according to a new poll released today by Invest in America and Data For Progress. The poll comes after the release of today’s Consumer Price Index (CPI) report, which raises the urgency for Congress to help families deal with rising costs.

“Today’s CPI report shows that we must continue to take inflation seriously. That’s why Congress must pass the Build Back Better Act, which will ease the pressures of inflation by lowering everyday costs for families. If you’re worried about rising costs for families, you should support cutting the costs of things families spend the most on — things like health care, child care, energy cost, and prescription drugs.

“American voters understand that the inflation we’re experiencing is not due to government spending — it is a result of pandemic-related challenges and corporate greed that are creating problems across the globe. This poll shows that voters know that if we are going to drive down prices, we need to invest in good-paying jobs right here at home.

“It’s simple: if we want to lower costs, create jobs, and boost the economy, we need to pass the Build Back Better Act immediately.”

The poll was conducted with 1,276 likely voters from January 7 – January 10. Key findings include: 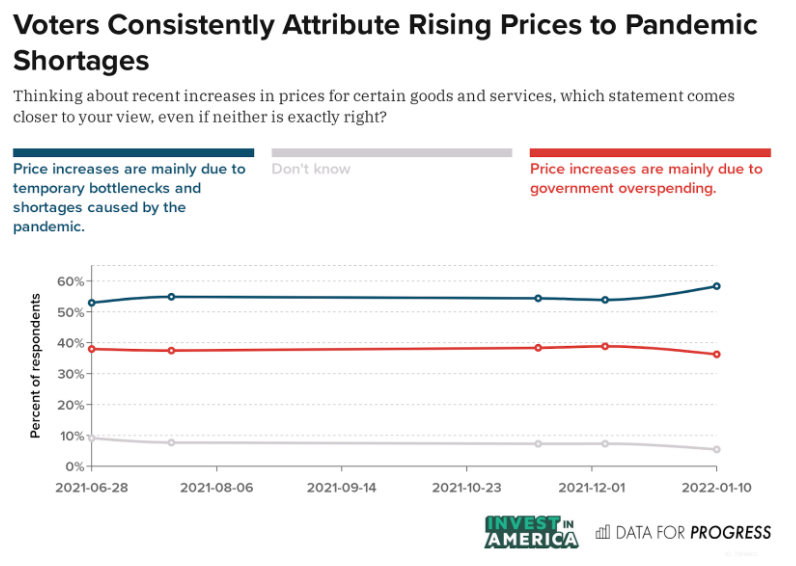 Here’s what to know about inflation and the Build Back Better Act in light of today’s Consumer Price Index:

The Build Back Better Act will lower costs for families.

Inflation is spurred by the pandemic and corporate greed, not public investment.

Experts agree that the Build Back Better Act will ease, not exacerbate, inflation.